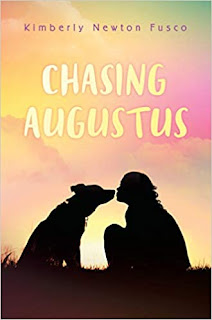 When I last interviewed Kimberly Newton Fusco, she had written a memorable YA novel, Tending to Grace, about Cornelia, dumped in a backwoods cottage to live with her great aunt Agatha. That book won numerous honors, including the ALA Schneider Family Book Award.

Kim had just come out with her second book, The Wonder of Charlie Anne, set during the Great Depression. Charlie Ann mucks out the privy, makes vinegar pies, and befriends an African American girl, inflaming the bigotry of her backwater town.  That book also reaped two starred reviews (Kirkus and School Library Journal)  and multiple awards.

Since then, Kim’s published two more beautiful novels, Beholding Bee (published in the U.K. as The Daring Escape of Beatrice and Peabody) featuring Beatrice who has been orphaned by her carnival parents. Bee travels with the show, helping Pauline at the hot dog stand and trying to hide the birthmark that covers almost half her face. Pauline assures Beatrice that the mark was put there by the kiss of an angel. When Pauline leaves to take a better job, Beatrice strikes out with a stray dog, a piglet, and an angel only she can see, to find her true home.

Kim’s newest novel is Chasing Augustus. Dumped with her grumpy grandfather when her mother takes off for California, Rosie’s only friend is her dog, Augustus. When grandpa tells Rosie she can’t keep a big sloppy dog like Augustus in their skinny apartment, she sets off on her bike, searching for her dog on a new road every day. Chasing Augustus was a Junior Library Guild Selection and a Random House Children’s Indie Spotlight Pick. To read a sample of her luminous prose, visit http://www.kimberlynewtonfusco.com/ 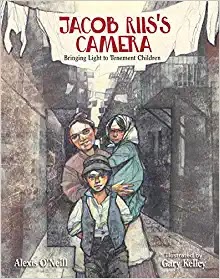 Alexis O’Neill is the author of the acclaimed Estela’s Swap, Loud Emily, The Worst Best Friend Ever, and The Recess Queen. I interviewed Alexis when she had just come out with The Kite that Bridged Two Nations, a nonfiction book about young Homan Walsh who managed to fly his kite across the roaring Niagara River, a kite carrying the first line for the bridge that would connect the United States and Canada.

This past March, Alexis published Jacob Riis’s Camera: Bringing Light to Tenement Children the biography of a pioneering photojournalist. It’s already Amazon’s number one title for Children’s American History of the 1800’s and garnered glowing reviews. Find out more about Alexis and her books at http://www.alexisoneill.com/ 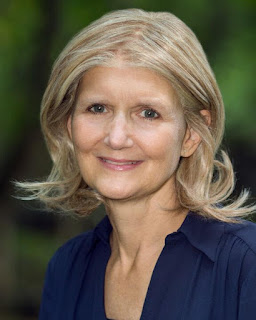